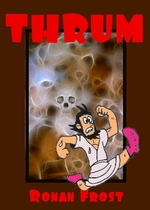 Thrum is an out-of-work dropout from magic university, frustrated and alone in a world ruled by sorcery and where landlords are backed by eviction ogres. His fate changes the day he happens across a scroll with an Archmage trapped within. The fate of the entire land is at stake as the Archmage struggles for his freedom and demands resurrection.

Driven from his home clad in dressing gown and rabbit shaped slippers Thrum is pursued at every turn by a sect of dark wizards that want the scroll for their own evil ends. He must battle against his innate and finely tuned sense of self-preservation (more commonly described as cowardice) to take up the quest and bring the scroll to the very heart of the enemy stronghold.

From a chance encounter he befriends an affable muscle-bound adventurer who becomes his staunch ally, and together they face bar brawls, magicians on uncontrollable supercharged broomsticks, battles with frog-like elves and seemingly immortal wizards.

Feats of strength and acts of cowardice, words of truth and of deceit; all come together as they journey across the land. All is not as it seems, and Thrum must confront a startling revelation as they discover the truth of the scroll.

After a fateful lapse in his duties, a boy raised as a spy must flee the castle that has been his home. Forced into the wild mountains and weakened by hunger and fatigue he is taken in by the yamabushi, ascetics living in isolation in the mountains. There he is taken to a temple high upon the mountains overlooking the capital of Kyoto, home of the legendary warrior monks well versed in martial arts - a force to be reckoned with even against mighty samurai armies. The boy's solace is short-lived however, for he is soon drawn back into the web of conflict, and he to find that all is not as it first seems to be...
The Clever Hawk is speculative fiction based on fact and folklore, in a time of bloodshed and upheaval in a land with a fascinating depth and complexity of history.